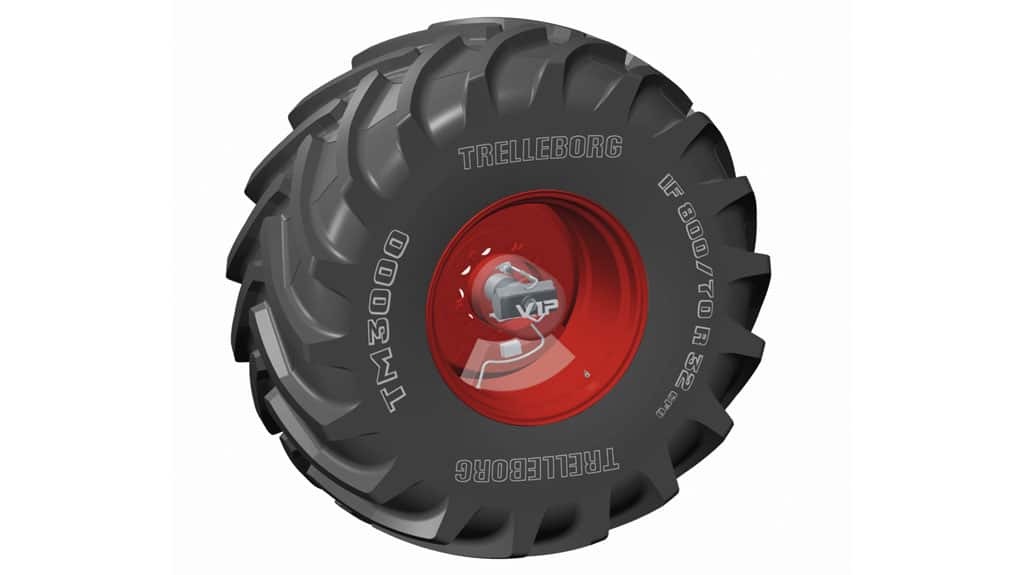 Posted at 05:42h in News by WP Contractor

Trelleborg announced the global launch of the VIP – Variable Inflation Pressure – system at SIMA 2017 in Paris, France, February 26 to March 2. The VIPTM system is a smart and autonomous complete wheel capable of self-adjusting the pressure of a combine harvester’s tire during operation according to its precise load, optimizing the tire’s footprint in order to reduce soil compaction.

Piero Mancinelli, R&D Director for Trelleborg’s agricultural and forestry tires, says: “Today, precision farming technologies are in use across over five percent of all cultivated land and this figure is projected to reach 20 percent within the next decade. As a result, driverless machines and robots connected with the Internet of Things (IoT) are fast becoming a reality in modern agriculture, helping farmers to produce more, with less.

“At Trelleborg, we have looked to establish the role of the agricultural tire in the precision farming and the IoT framework, investing significant time and resource to further enhance the potential of these innovative technologies.

“The Trelleborg’s VIP™ system represents a step forward compared to the TPMS (Tire Pressure Measurement System) or TMCS (Tire Pressure Control System) already on the market. This is because the VIP™ system is able not only to measure and/or change the tire pressure but also, being an intelligent system, of determining and adopting the right pressure at the right time and in the right place, without manual intervention. This is completely in-line with the precision farming philosophy.”

Tests show that the VIP™ system achieves better flotation, resulting in lower soil compaction of up to 10.5 percent and up to 5 percent higher crop yield compared to a standard wheel. This is due to the fact that in a standard wheel the pressure within the tire is constant, so the footprint of the tire varies according to the load, limiting the effectiveness of the tire. As the Trelleborg VIP™ system changes tire pressure depending on the load, the footprint of the tire remains constant at its maximum dimension.

Directly integrated on the tire’s rim, the VIP™ system consists of a set of sensors measuring several parameters  including  load,  pressure  and  temperature  along  with  an  electronic central processor controlling a compressor and a valve to adjust the pressure. The VIP™ system automatically senses whether the machine is in the field or on the road and modifies pressure accordingly, inflating on the road or deflating in the field.

The system also detects when, on the same axle, the load on the right tire is different from the load on the left tire. Giving a huge advantage on slopes, where the VIP™ system can set two different pressures according to data received, maximum safety is ensured along with high flotation, a constant footprint, excellent handling and low soil compaction. All of this contributes to better efficiency and productivity for the farmer.

Not only giving benefits during harvesting, the VIP™ system also reduces fuel consumption and emissions not in post-harvest ploughing operations as a soil with low compaction allows the plough to advance more easily, reducing operating cost and working time.

Further developments to the VIP™ system will include digital interface devices and a specific App to allow the operator to have total control of machine set up, footprint area, tire pressure and the total machine efficiency gained through the system.